The Urban Dictionary describes the term “Mugging” as;  “Mugging; Is to stare or look at someone with malignant thoughts or intentions.” while, according to Google’s Dictionary “Mugging” an act of attacking someone in a public place.

Mugging in both contexts was certainly the intention of the visit by Family and Community Services in alliance with MNI Electrospark and Spotless Corporation to the tiny apartment nestled among Bateau Bay’s sprawling social-housing complexes and human-waste treatment plants.

Five people from the parent companies arrived on the site claiming to be carrying out a simple property inspection. It was the second inspection forced on the resident in a fortnight! Under the Residential Tenancy Act 2010. (NSW) this is a breach of the contract FACS has with all of its residents but, without a body willing to enforce The Act, FACS tramples it regularly and with alacrity 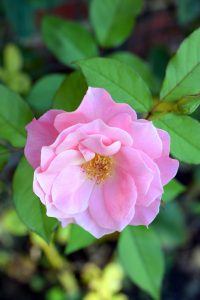 From Barbara’s garden. Grown with love

Many of the property managers and housing staff contacted as we prepared this story expressed shock at the number of people involved in this home invasion. They pointed out the composition of the group. We were made very aware that this was not an inspection in anything more than name. It was a manipulation of the record to create the fantasy that a situation existed requiring strong action.  It was show of force to intimidate a seriously ill and handicapped resident by a state government entity and several powerful corporations that have lost the plot! It was a mugging and a home invasion with a property inspection thrown in as an excuse! It was more of the harassment and vilification these bodies have been heaping on this fragile person for years.

The resident already claims to have been regularly verballed and threatened by Family and Community Services as well as contractors associated with MNI Electrospark.

One of the things that enrages all of the aforementioned good folk is the fortress of CCTV cameras now greeting every attempt to claim they were threatened or felt threatened by the resident. Some months back the resident was so desperate to stop the harassment and false accusations during FACS visits he hired a security guard and a corporate administrator to be witnesses inside the apartment during one of the property inspections.

All these cameras and personnel were financed from his pension.

It is suggested that after finding who the guard was FACS contacted that person or his company and made some order because he no longer accepts calls from the resident’s company. The administrative witness or his company is also believed to have been contacted and warned off.

This time the resident moved his security and witnesses off site. He had people monitoring the video feeds on the internet. Some were as far away as interstate and there was one local on a nearby feed attached to the resident via local citizen band radio network. The fact that citizens can still use discreet and private radio channels is another thing that outrages and offends government and corporate bodies. No doubt when they have time they will ban it under some bogus claim of criminal usage.

To the resident this security is very important. He has a terrible “complex post-traumatic stress disorder” that creates stomach churning distress when people are within the walls of his apartment. Many years ago, during a time he was investing an insurance claim, he was held and tortured by corrupt police who were after the details to the bank account.  FACS know all this and their constant use of police as well as their entries in force can only be seen as attempts to intimidate!

This post is already long but some time will be saved by recognizing the progress of the actual inspection does not need coverage at this stage. More important is the composition of the group and what that portends for the future. 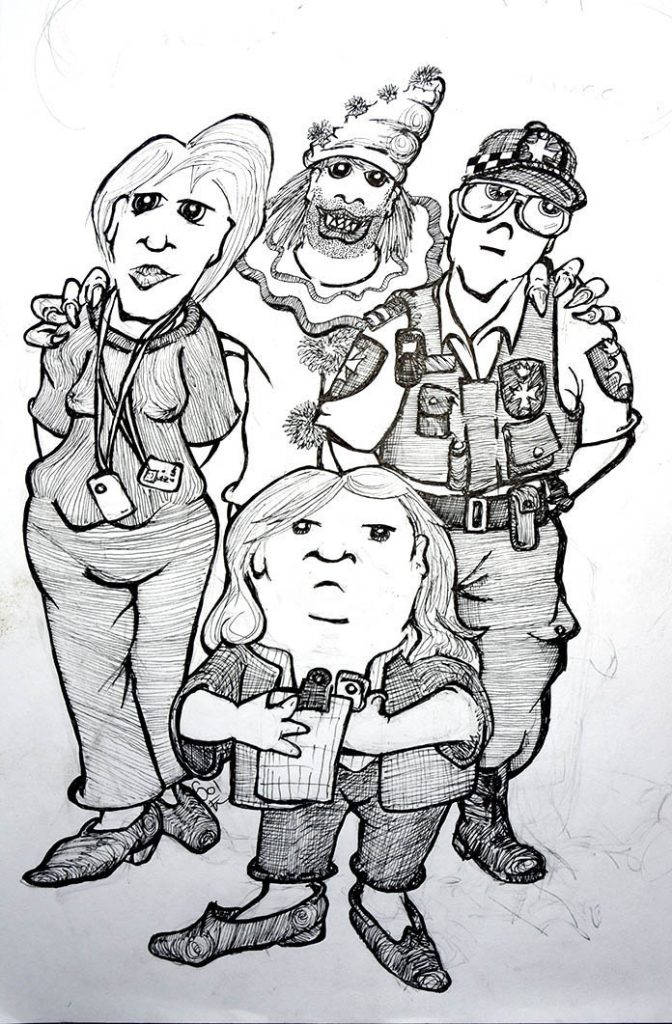 Family and Community Services, Wyong. Inspection team. A cartoon detailing a few persons attending in a similar group from an earlier inspection

Present was a locksmith. Having this person on site requires that FACS has been unable to gain lawful entry after several attempts. The contractor who left bits of paper on the door and then claimed to have been denied lawful entry is of particular mention here. Worth mentioning also is the attendance of the contractor a fortnight ago who claimed to have been denied entry but is caught on video inside the apartment. He then claimed to have left because of cameras but nowhere in the The Residential Tenancy Act does it allow for visits by staff to be endlessly recycled if one of them is not willing to work. It certainly does not allow them to be used as numbers to support an “entry denied” claim.

The basis for the presence of the locksmith is fraudulent and a serious breach of several acts and legislation apart from the Residential Tenancy Act 2010 (NSW). If it is not challenged immediately it does create a record on FACS files where it would appear the resident had denied legal access and had to be forced to allow entry. The locksmith took a photograph of an existing lock that FACS already had a key to before scampering back up the driveway out of sight!

Two weeks before this a contractor from MNI Electrospark had an uneventful wander inside the apartment while the resident was present. There had been no threats and no antagonism towards anyone beyond an accidental brush with a contractor that was blown up to a hostile event by FACS almost a year ago. The little army visiting the apartment included a police woman. There is another dishonest record where FACS employees claim there was some need to have police on site and because it exists no one will question it. They have sent police without cause and then placed the police visit on record as a regular tool in their harassment and building of a fantasy tenant for years.

If the police were there for any reason it was to protect the interests and bodies of the two stubby little staffers who had no reason to be on site at all. The question asked by everyone on hearing of their presence is about the possibility that they are the mother-lode when it comes to a source of the childish vindictiveness growing into a harmful habit by FACS. There was no reason to be there and they didn’t even bother to create one. They just stated they needed to chat with the tenant. The Residential Tenancy act does not allow for community tag teams to engage handicapped and mentally damaged people during forced inspections but here they were. The Disability Anti-Discrimination Act suggests their presence and activities are a breach of its spirit and legislative field also.

The last person to be mentioned is one carrying a tiny step-ladder and trying to distance himself from the others as the fast talking around the door continued. He is a man claiming to be a building inspector. If that is true he is the only person with a legitimate claim to entry and also the man who should have been present a fortnight ago! He was welcomed with relief when the resident realized there were no further job descriptions awaiting entry. What harm this man may bring to the mix will probably be felt quite soon and come in the snail mail.

The police, supported by many interjections from the two females, told the resident that while he was allowed to have CCTV on his property he was not allowed to post the videos or images. The paper with the act that describes NSW right to privacy around optical surveillance devices was not at hand but he had fifty DL postcards with the general The Surveillance Devices Act 2007 (NSW) (section on optical devices) ready for them. He thanks Vistaprint for their amazing job of having them printed and delivered in four days. He insists that he is allowed to post what he captures although he never posts or even views the regular work of contractors around the site and has cameras aimed so they dont breach neighbor’s right to privacy. He also claims that he will not supply recordings of contractors or residents to any outside body unless that person asks for a copy. There is very little recording of anyone past the edges of the property anyway.

There is more that needs covering in this story. The people who had gained the apartments inner life chattered on about odd communications problems and totally confused the resident who can only rarely keep up with more than one fast talking charlatan at a time. He thinks they had made an agreement where the building inspector would go back to MNI Electrospark and get a work order for a little repair. That person or another would leave a message on the answering machine and an email agreeing on a time to visit for work. It was the most difficult way of doing things they could find considering there are already organized communications on record. They agreed that the guy who had lied about being disallowed entry and had claimed paper slips was an acceptable and legal claim to denied entry would not be allowed back.

The guy who would not be allowed back and was dishonest woke the resident with loud banging on the screen door at 8:30 in the morning the very next day. He claimed to need access to the smoke alarm. He claimed to have tried to phone. There were nearly twenty calls recorded. All of them hung up rather than use the answering machine. On a phone that is usually silent we could only make one conclusion. Twenty dropped calls is also harassment!

The resident lay in bed fighting to get the blood into his ruined legs and get them working, struggling to overcome waves of anxiety, and looking at the smoke alarm with yesterday’s sticker of compliance and maintenance. So maybe he only dreamed there was a deal! Either way, nobody who turned up without warning could expect him to greet them at any random moment. Expecting and trying to force residents to be available that way, incredibly and boringly, is another breach of The Residential Tenancy Act 2010 (NSW) which seems to have nobody enforcing it at all